What’s the difference between a Hijab, Niqab and Burka?

A burka, hijab, and a niqab, all of them have one thing in common. They come from an Islamic background with one central ideology: a protective barrier to cover women from the male gaze.

They are an age-old practice that has been accepted by Muslim women all over the world.

Depending on each country and its very own traditions, there is a significant difference between a burka, hijab, and niqab.

Though they all have a similar motive, that is to protect the modesty of a woman; they cover women in their unique ways: a burka, hijab, and a niqab are all signs of having religious faith towards Islam. Depending on their family traditions, cultural backgrounds, and ideologies, they wear either a hijab, niqab, and burqa accordingly.

This blog will shed light on the difference between the three; a burka, hijab, and niqab.

Read on to know more about these veils.

Difference between a Hijab, Niqab & Burka

Compared to all the Islamic veils, a burqa is the one that conceals a woman completely.

It is a protective covering in the form of a loose gown. It covers both the face of a woman and her body. There is a mesh present near the eyes to make it easy to view.

A burqa took its origin way back in the A.D’s in the Arab countries. Soon as the religion spread, so did the awareness of wearing the burqa. More women embraced the philosophy and felt empowered wearing the burqa. Most women in Pakistan, Iran, and Asia wear it as a sign of respect, modesty, and faith.

When compared to a burqa, the hijab is less covering. It is a scarfed woman by women that covers only their head and all of their hair. They are also referred to as headscarves and are more embracive. Over the years, many women worldwide have opted to wear a hijab instead of a burqa as it is less intense. With changing times and evolving fashion trends, the hijab has become a significant fashion statement, especially in Arab countries. They have specific styles of wearing them to make them look more classy, elegant, and smart. Though it comes from a religious background, many women have embraced the hijab and have a glow of innocence on their faces. Women all over the world have embraced this and have styled in their own unique ways. Some opt to cover their heads and chest, while some loosely hang it over their heads. This portrays a sign of respect towards Islam. 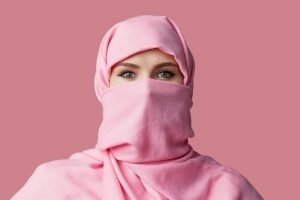 The niqab is worn by Muslim women to cover their entire face, excluding their eyes. Most of the niqabs are usually in color black, while some women opt for monotone colors. This protects their modesty by hiding their identity. A niqab can be worn wither with a burqa or a hijab as it covers a woman’s face either way. It is a loose covering that falls in front of the face, and some niqabs have a mesh for better vision. Most women in countries like Iran, Iraq, and the Gulf wear a Niqab. They are more than comfortable to wear it and have embraced the ideology of Islam beautifully.

This is the difference between a burqa, hijab, and a niqab. As stated in the Quran, it is mandatory for all women who have faith in Islam to dress modestly and cover themselves. Though they come from the same religious background and have the same motive, to protect a woman’s modesty, each of them plays a different role.

We hope this blog was informative and helped you gain a clearer perspective!

Is it haram to not wear a hijab?

How to Wear A Hijab in Different Styles

How Do You Tie A Hijab?